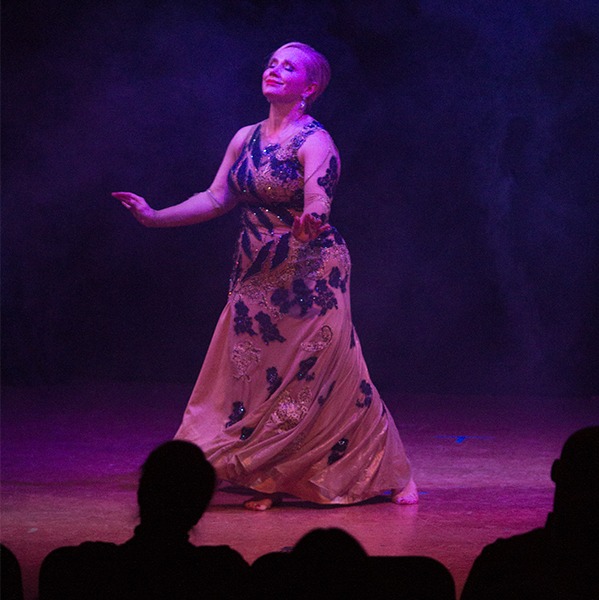 As a native New Yorker, I can honestly say that I live in the world’s capital of culture and performing arts. That’s one of the many reasons I feel belly dance must be respected as an art form and raised to the higher levels of the theatrical stage. I do what I can personally to expand, lift belly dance and to elevate the dance form.

Confessions of a Belly Dancer © is just that – it’s an accomplishment I’m proud of and it’s caused quite the buzz here in NYC.

Confessions © is remarkable because it’s not just another belly dance show … it’s the combination of a published book (there are two published works already in the series) and a full-length, professional theatrical adaptation of the book … complete with the prestige of being an NYC Off-Broadway theatrical performance – to a full house! And for NYC, that’s quite the accomplishment.

It’s our stories, the stories of the women underneath the glamorous costumes – our pain, our joy, our challenges and our triumphs. One audience review called Confessions ©,”Real, raw and boldly unapologetic.” Just like belly dancers.

I met Raksanna, the director, author and executive producer of Confessions ©, in Egypt last year. I had begun working on my dance here in New York at Serena Studios with Layla and Zenaide, then started to study and train with the amazing Yousry Sharif. One of my friends and a fellow dancer, Monet, encouraged me to take my love for belly dance and go to Egypt, to the motherland of Oriental dance, so I could experience first-hand the culture, history and dance. I thought about Monet’s advice and decided to go to Randa Kamel’s course – and always seeking to better myself, decided to compete in Randa’s competition.

Raksanna and I sat next to each other at the opening show. I was so new to Egypt and to Randa that it was really nice to get the ‘inside’ scoop from Raksanna. We became instant friends and felt a strong connection and a shared commitment to our art form.

We spent a lot of time together in Egypt – both in and out of class. We went shopping together in Khan el Khalili (And that was an adventure!), enjoyed Turkish coffee and talked for hours. She encouraged me as I progressed in the dance and was one of my biggest fans when I competed.

During our discussions, Raksanna mentioned she was working on the first edition of her book and co-producing the Chicago debut of Confessions© with Momo Kadous. She mentioned that one of her personal dreams and goals was to bring belly dance to NYC and present a show either at Carnegie Hall or in a well-respected Off-Broadway theater. Being from NYC, I knew that the concept of Confessions© was something that was perfect for the Big Apple and knowing Raksanna, I knew the quality would be top-notch and worthy of the NYC stage.

When auditions for Confessions© opened, Raksanna called me right away. She asked if I was interested in auditioning. She felt my story of how belly dance had transformed my life was a perfect addition to the book and knew that my level of dance was high and was a great fit with the show. The venue was the notable Manhattan Movement of Arts Center (MMAC), a well-known and respected Off Broadway theater. I had previously performed there and knew it was a top-notch venue.

I was excited! Since my trip to Egypt, I had continued training, performing and competing. In fact, I competed here in NY and placed as one of the top three winners. The opportunity to be part of Confessions© was exciting and I knew that it was a great fit with my own personal goal of elevating the art form. I was confident I could make a meaningful contribution to such a worthy show.

Raksanna called me back after the audition and invited me to join the cast! And as part of being in the New York City show, my story would be featured in the second published edition of Confessions © and I would also receive a complimentary, professional photo shoot by David Gore, her personal photographer.

Raksanna and David traveled to NYC to meet the NY team and conduct the photos shoot. We met at Belly Dance America with Jehan Kamal and got to know the rest of the NY cast including Carol Tandova Henning, Esma Korn and Serpentessa. We recorded our voice overs for the show and then gathered for a light-hearted dinner nearby.

Time quickly passed and soon, the big weekend came! On Thursday night, the Chicago team met with the NYC team and we all got to know each other and share the excitement for the stage. Friday was the tech run – we brought our costumes, worked with the sound and lighting technicians and spent time fine tuning and perfecting the choreography for the casting call finale! We finished late on Friday, then returned for Saturday and the big event!

Dress rehearsal ran from 3:00-6:30 pm and then the main attraction started with an exclusive VIP party. The party was about an hour long and featured live music with Cora Camille of Final Veil. Final Veil had just released their newest CD, Arabian Daze. This CD is an eclectic collection of Middle Eastern rhythms combined with trance and dubstep music, and the VIP party showcased two of hits from the brand new album. Serpentessa entertained the VIPs with her snake and gave the audience a chance to come and pet the snakes and take pictures. Carol Tandava Henning performed a piece of her show, Blood on the Veil, and shared part of her own transformation through belly dance.

Then, the doors opened for general seating and the show began. It was a full house! And what was very exciting to me was that the house was filled with more non-belly dancers than dancers! This is important – and truly an amazing feat in NYC because of the amount of belly dance shows, Broadway, Off Broadway shows and other world-class entertainment offered in NYC. It sometimes can be difficult to sell out a venue. The fact that we were able to get paying ticket holders from the main stream New York community was telling – and it was an opportunity to address the stereo types and share our true, authentic stories.

All of the stories presented were real-life experiences and were spoken through the language of our dance. Personal narratives included a woman’s fight to conquer cancer, a mother’s struggle to support her transgender child through a gender reassignment surgery, a 13-minute zaar ceremony and a dancer’s recovery from a violent crime.

My confession was how my belly dance dreams and ambitions have come true. I shared my story of how I became involved in this beautiful art, my trip to Egypt, my personal recovery from a stressful work situation and heart-wrenching break-up to rediscover and redefine myself through belly dance. And I chose the perfect costume – it was a bright red fabric with ruffles and rhinestones that caught the light just right, complimented by a bright yellow veil. I also got to sharpen my acting and comedic skills by playing the waitress in Carole Tandava Henning’s “Day in the Life.” Carol Tandava Henning’s performance was staged as musical and it was an honor for me to be a part of.

My goal was – and will always be – to inspire women to take a chance … to believe in themselves and their inner power to heal, to embrace life and be the light that inspires others.

Because that’s what Bellydance has done for me, Don’t you agree?

About the Author: Katrina Eady Kay Kizi’ah is an award winning soloist, who has been in several dance companies, has studied and performed in Egypt, and is prominently featured in NYC. Her unique style is a blend of extensive training in American Cabaret, Ballet and Modern Egyptian. Confessions of a Bellydancer © marks her fourth (4th) Off Broadway production. Her credits include Rehearsal Coordination, Production Assistant, Assistant Dance Coach, Emcee and soloist. Holding a Masters in Special Education, Katrina teaches high school and college in Psychology and Dance Department.  Katrina is honored to have met Raksanna and be part of Confessions of a Bellydancer © NYC Cast.

By raksanna•Published On: April 30, 2022•Categories: Articles•0 Comments•
Previous
Next

All images and content are protected by copyright law. Written permission from Raksanna Productions, Inc. must be obtained prior to copying, posting, reposting or distributing of any photos or content.